Guest post 1: When prostate surgery doesn’t catch all the cancer

Not everybody gets to have their cancer cut out and then stay in remission. Here’s the beginning of my story of ongoing cancer after prostatectomy. I was diagnosed with prostate cancer 14 years ago, and it is still with me now. I had a radical prostatectomy that didn’t catch all the cancer.

Looking back, I see that I prepared myself internally for this journey. Before being diagnosed, I was already on a personal growth journey. I had learned to explore what the things inside me were that were keeping me stuck.

I had also unlearned that typical male thing of doing it all by myself. Rather, I looked out for people who could help me – and were willing to put up with my shit. So cancer wasn’t the first whack to my naivety!

My first thought on diagnosis: “Wow! What is this going to allow me to push through, which I wouldn’t have pushed through before?” I was so excited – for about 15 seconds. 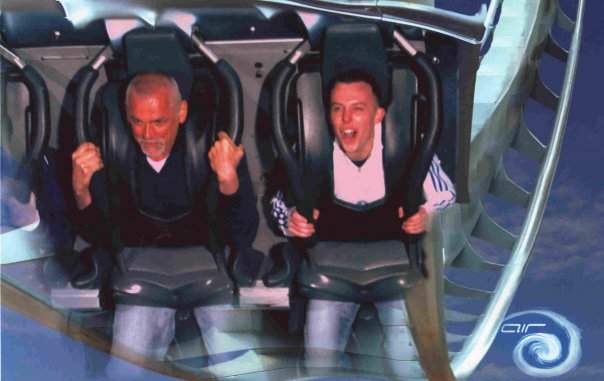 On my initial diagnosis I ‘needed’ to go on a scary ride at a theme park. When I got to the end of the ride I said to my mate (who accompanied me – Ian on the right of the picture) “who the hell was that screaming their tits off?” He said “it was YOU Martin!”

Initial treatment: surgery before the robotic machines were available

“Mr Wells, you have prostate cancer and we recommend a retropubic prostatectomy….”

Not for the fainthearted: my surgical scar, February 2008. Gingerbread men an optional extra

As I learned very quickly, that meant they were going to cut me open from my belly to my penis and take my prostate out. At that time, robotic-assisted laparascopic “keyhole” surgery hadn’t yet become established in my part of the country.

“… and we are not actually sure whether this will remove the whole extent of the cancer.” At this point, never having had the slightest symptom of prostate cancer, the thought started going through my mind “am I going through all this stuff for nothing?”

Yet, in the end, I went ahead and had the open surgery. It gave me a chance to accept help – from a traditional, but in my case awkward, source.

My relationship with my Mom has generally pressed a lot of buttons for her and for me. But she offered to help and I accepted. She ended up being the most wonderful caregiver for me for the six weeks after surgery.

You have to realise that this kind of open surgery is WAY more invasive than the modern robotic-assisted laparoscopic surgery. I needed a lot of help. There was just so much love – she gave it to me and I was able to receive it.

Creating a Heart Circle of support

As the wound healed, during my recovery, six of us prostate cancer survivors created a weekly Heart Circle. We would meet in a circle, right here in my house, and follow these rules:

I remember getting in touch with my feelings – and sometimes I would sob so deeply and resonantly, it came not from my throat but two hundred yards deep down inside. And the other folk in the heart circle would just be with me in this space. They didn’t want to know why and they didn’t try to fix me. It felt so therapeutic.

Looking back, those heart circles were as good for me as any medicine. Particularly as it turned out that medical interventions haven’t been able to cure me, just hold the cancer somewhat at bay.

Cancer after prostatectomy: when surgery is not enough

Three months later, I was back at work, delivering a three day workshop at Warwick University, when I got the call I had been dreading: my first PSA test results. I got a phone call to say

“I am sorry Martin, your PSA is still high. We haven’t caught the cancer. It has spread within your body.”

That for me was more devastating than my initial diagnosis.

I’d just climbed the mountain of prostate cancer and radical open surgery, and recovered from that – only to find there was another even higher mountain to climb. And it is a journey of uncertainty.

I was then passed on from the surgery department to oncology. And I wasn’t asked about my wants – they simply said, this is what needs to happen and here’s who you need to see. I didn’t like it then, it felt very impersonal. Now I realise that they were working on the bigger statistical picture. Generally, people whose cancer is not cured by surgery need further treatment from oncologists. They were very matter of fact and technical.

What they prescribed for me in 2009 was radiation therapy and two and half years of androgen deprivation therapy (ADT). “You are likely to live for another ten years,” they said. It hasn’t been pretty all the way, but here I am fit and well 14 years later.

I coped with the radiation therapy by engaging my physicist’s curiosity about these amazing machines.

There was more to discover, and even higher mountains to climb. The story continues in another post.

How I learned to respond beyond the pain 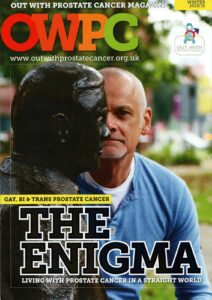 What I most want is to connect with other people, and share my energy and these experiences. Like the heart circle – full of courage, listening openly without trying to fix, simply letting our humanity resonate.

I realise that my family history has had lots of pain, and yet my forebears were so scared to express it or speak openly about bad things that had happened. So I grew up (being the weird one in the family) believing that my wanting this genuine connection was a bid thing. But somehow I also got the gift of realising “this doesn’t feel right. Why is my Mum crying in silence?”

So I made the commitment to change that ancestral pattern by speaking out, and by crying out. I’ve learned that being in touch with my feelings means accepting the difficult feelings along with the nice ones.

I think I have been a bit like Madame Curie, very inquisitive and curious, and it has served me well. I have also been talking about my experience on many platforms, helping to create what I call Prostate Cancer Literacy.