How I found out I had prostate cancer

I was 61 and I felt as fit and healthy as I had ever been. When I went to see a GP in November 2019 my issue was apparently unrelated to my prostate. Somehow, on a hunch, she started asking me about my prostate and my answers to all the diagnostic questions were “no” – no difficulty urinating, frequent bladder emptying etc – and I had been having annual prostate screening checks since I turned 50. However, I wavered about when the last PSA and digital rectal exam had been “maybe a bit more than a year.”

Thank goodness she went with her hunch and said “let’s just check it now.” So she did and said “it doesn’t feel right – see a urologist.” Within a few of days my urologist had confirmed there was an irregular area in the prostate and sent me for an MRI scan on 3 December.

I was sure the results would come out negative. I felt so good. My PSA (prostate specific antigen – a notoriously unreliable indicator of budding prostate cancer) was still well below the standard danger threshold of 4. Mine was only 3.3 and only rising at 20% a year

I was confident this was a mistake and I would be given the all clear, even after I google the words from my MRI report “PIRADS 4 lesion” and find out this means a 4 in 5 chance there is cancer.

Even after I sit with the urologist reviewing the results – clinically significant cancer likely in the left peripheral zone – I am sure that I will end up being the lucky one. His tone is reassuring. He tells me to go on holiday and come back for the biopsy in January, which I do. He says in cases like this, sometimes the best option is “watch and wait” but we need the biopsy to find out more before we decide. My prostate is barely enlarged – 32 cc (just over 2 tablespoons) compared to the walnut size typical in a young man. I later find out that this is a big plus in terms of regaining continence after surgery.

I am so glad I did go on holiday! I had work scheduled in Beijing and my wife and I took the opportunity to go together and combine that work with the adventure of a lifetime in China – including hiking on the wilder part of the Great Wall in the snow and sleeping overnight in a local village 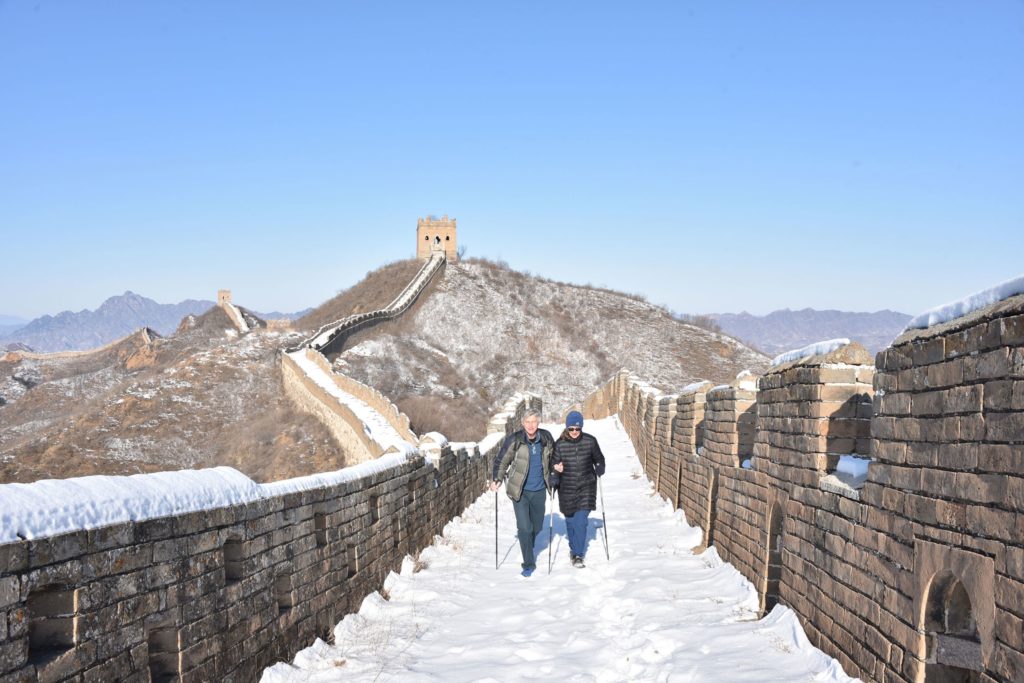 Hiking the Great Wall of China between MRI and biopsy

It’s a different story in January after the biopsy. My urologist’s tone is very firm and direct: it is time for action. There is definitely cancer in my prostate, and some of it is close to the surface.

The report says it is still confined within the capsule which seems to be the most important thing. They only find cancer on one side of the prostate. The report calls it Stage T1C and that feels like a good distance away from the dreaded Stage 4 Cancer. I start learning fast about Gleason scores – mine is 7 (3+4) which means the majority of samples score 3 out of 5 (where 1 is OK and 5 is most malignant) and some score 4 out of 5.

I have choices and my urologist describes them very clearly – basically for me, it is either radiation therapy or surgery. Both have big impact both on the cancer and on broader quality of life. It sounds as though radiation leaves urinary continence and sexual function less impaired in the short term but can often end up just as bad in the long term. If I go for surgery, he recommends the laparoscopic robotic assisted type, rather than open surgery. It doesn’t take me long to choose and I meet the surgeon that same day. He’s young, positive, amazingly clear in his explanations and I trust him. Later I remember to ask him a few questions, and go back to see him the following week to sign up to have my prostate surgically removed.

So on 24 January 2020, I’ve decided on Robotic Assisted Laparoscopic Radical Prostatectomy (RALP or RARP for short). Rather disappointed to know I have to wait a total of 6 weeks for the aftereffects of the biopsy to clear. We schedule surgery for 27 February, 2020.
More about that in the blog.

And in case you are thinking that surgery was overkill: the pathology report on my prostate after removal showed it was at Stage 3 – beginning to emerge from the prostate capsule. So not a moment too soon. There is a good chance I have escaped with my life.