8 July 2021: Prostate cancer treatment increases risk of Peyronie’s disease which leads to bent or misshapen erections. This is caused by the buildup of a hard knot or lump, known as plaque, in the membrane that surrounds the erectile tissues of the penis. Because this plaque can’t stretch, it produces a bend in a man’s erection when the remainder of the penis expands. I noticed a small (and new) bend in my own erections recently and was able to get self-help advice from a physiotherapist. For more serious cases, thank goodness there is now solid evidence for non-surgical treatment of Peyronie’s disease.

My lucky story with a mild bend

This year I have been celebrating the gradual recovery of my erections after prostate cancer surgery. I’ve been diligent about penile rehabilitation over the last 16 months. I am convinced it has helped me avoid any of the serious atrophy that can be caused by prolonged erectile dysfunction. However the return of firmness to my penis has revealed a minor but scary abnormal curvature. It’s a bend that was not present before: a very mild version of Peyronie’s disease.

I consulted my wonderful physiotherapist Pierre Röscher, an advanced researcher who has specialised in pelvic floor and related issues. He recommended very simple treatment as a first line: simply locating the knot, or lump of plaque beneath the skin. Then rubbing that knot between the fingers and massaging it for a few minutes each day. It is easier to locate when the rest of the organ is flaccid.

I found the lump was quite easy to detect just below the skin. Mine was less than a centimetre in diameter and felt distinctly harder than the underlying tissue of the penile shaft. I am glad to report that a few weeks of this daily self treatment has reduced my unwanted curvature to something so minor that I am no longer worried.

Peyronie’s disease arises from a variety of causes, particularly for men in their 50s. Treatment for prostate cancer is one of the common causes. There is also growing evidence that the embarrassing nature of the condition means it is under reported. It is not confined to the over 50s – even some teenagers experience this alarming problem. And I suppose many of us have heard of a famous ex-president reputed to be a member of the Peyronie’s Club.

According to Dr Milios (see below for her research)

And treatment is not always as easy as my experience reported above. When you google the problem, lots of scary surgical treatment is the first to pop up. So the research reported below may be good news for some sufferers.

Therapeutic ultrasound is commonly used by physiotherapists for other muscle injuries and is silent, quick and totally painless.

The treatment she tested and found to be effective consisted of non-invasive and painless ultrasound therapy. Men received the ultrasound treatment in twelve ten-minute sessions spread over about a month. The graph below contrasts the results for the treatment group (left hand dark columns) with the untreated control group (right hand grey columns). 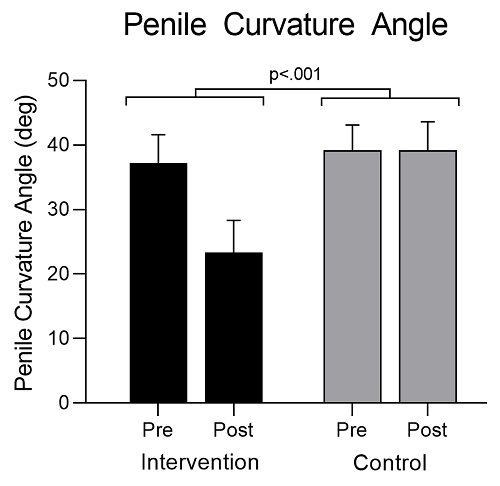 She reports that her trials produced “an average 17 degree reduction in curvature [and] several participants who had other penile deformities, such as indentations and hour-glass formations, also observed improvements in penis shape and appearance.” Based on other research, she also suggests that extending beyond 12 sessions would likely have even bigger impact.

This seems like an approach worth exploring before you turn to yet another round of surgery.