The harsh reality of cancer

The reality of my husband’s cancer hit me only at the post-op check with the surgeon. He described the operation, and showed us part of the film done during the surgery, with the arms of the robot inside Mish. Even as a biologist, I found it hard to watch.

Then he described the biopsy results of Mish’s prostate – more cancer than either biopsy or MRI had indicated, including in places that looked clear pre-op.

If either of us had any doubts that the surgery was necessary, this news promptly dispelled them. The seriousness of the cancer became real.

Mish’s physical recovery was quick and determined. I was confused – he had six cuts in his abdomen, and the cancer was serious. Yet nine days after the surgery he walked a five kilometre parkrun.

He was sore and not as dynamic as usual, but improving quickly. Sex was not happening, but I was not missing it: at this stage the anxiety about cancer returning was stronger for me than it was before the operation.

And the backdrop to this time was the increasing fear of coronavirus – the first case in South Africa reported a week after Mish’s surgery, and country after country going into some version of lockdowns.

Away from the city

Before the surgery we planned a week at the isolated family cottage near Cape Town. Despite the threat of lockdown, we decided to fly to Cape Town, as we both find being at the cottage the most relaxing and healing place we can be. A day after we arrived, a three week full lockdown was announced. Despite our kids’ urging, we decided to stay. We quickly stocked up on food and survival necessities.

While Mish’s superficial recovery was clearly going well, I was more engrossed in adapting to the lockdown situation. My lecturing and teaching immediately moved on line, and I tried to carry on social interactions with friends.

Uncertainty and fear about coronavirus and the future loomed large for me, with the gravity of the cancer underlying everything.

My experience after prostate cancer surgery: new forms of intimacy

Mish and I continued connecting with hugs and kisses each night. Yet there was a distance because of his erectile dysfunction and other internal damage from the surgery. My sexual desire was I think sublimated into dealing with the changes in our lives because of lockdown. I was sure that even though we were not being very sexual, that this was temporary, and I was less worried than Mish.

Two weeks into the lockdown Mish was able to have his six week post-op PSA test, which came back as undetectable! For me, a lot of anxiety disappeared with this news. We were having a good time in lockdown – lots of space to walk, garden and swim, with good solar-powered internet to stay connected and working.

We focused on even healthier eating than previously. I found online yoga classes to take which helped balance all the teaching I was giving. These sessions were grounding for me. We both had paid work that was carrying on. My energy was going into changing my working style to being online.

After prostate cancer surgery: what I noticed as a partner

Incontinence was irritating for Mish, but easier to manage with our outdoor lifestyle. Living in a small cottage with two gas plates and an open fire for cooking, limited lighting and hot water, and few clothes was great for simplifying our lives.

I knew that Mish was increasingly concerned about his ED. I continued to feel that we would cope and gradually re-establish our sexual connections however we could work it out. Right then there were so many adjustments to make in our lives, and the weather was getting colder and the days shorter, making cottage life less attractive. 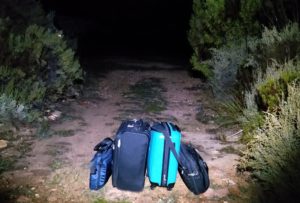 Leaving as we arrived 6 weeks earlier – hand luggage only

Back to the city

Six and half weeks after we had arrived at the cottage, a brief inter-provincial travel window was opened during our ongoing severe coronavirus lockdown.

For a few days we had the legal opportunity to drive home to Johannesburg. But there was a curfew from 5 am to 8 pm. Yet I longed for home and the relative comfort of a proper house as winter began to bite.

So we made the 1400 km dash in our tiny rental car with only minutes to spare before curfew came back down.

This is Part Two of my story – the two months immediately after his treatment. Part one covers the period from his diagnosis to treatment for prostate cancer.

Most of my posts are being published about a year after the events actually happened. It’s hard to write about this stuff in the moment! When you see a date from 2019 to early 2021, I have used my extensive notes and journal to write it like it was back then for me.