Guest post: The road to dry nights after prostate surgery

Without a doubt, of all the medical interventions I have had, my prostatectomy has left the deepest scars. Thrown instantly into erectile dysfunction and bladder incontinence, my world was thrown into a deep turmoil.

This is my story of how I navigated the night time aspect of the bladder incontinence that hit me immediately after surgery. My following post explores the longer road towards dry days.

Not my first medical intervention

I reluctantly joined the band of prostate cancer survivors in November 2020. Prior to that, I felt I’d had a slightly above average association with modern medical science. Nothing particularly life threatening.

I’d run the full gamut of tonsils, appendix and wisdom tooth removal. I’d nearly lost an eye from a motorcycle accident and had numerous corrective surgeries for that.

And, amusingly in hindsight, I’d had a vasectomy, a vasectomy reversal and now a biopsy and prostatectomy. So I’ve been fertile, infertile, fertile again, infertile again — phew! And each time a surgeon had rummaged around in my groin, I’d wind up black and blue from bruising along with a very interesting set of tiger stripes along the length of my penis. 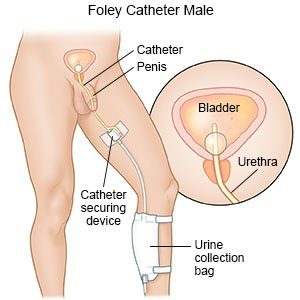 Bent over with a plastic tube hanging into a bag

You know it’s coming. But, when you wake up after surgery to find a tube sticking out the end of your penis, well, it’s just shit! Then it’s uncomfortable.

And then, worst of all, it’s demeaning! First the nurses, then your wife see you scuttling around, half bent over with a tube hanging down into a bag of amber liquid.

I was terrified to look and just as terrified to touch myself. I had to have the catheter for the obligatory week and then I had to contemplate how much it would hurt coming out. Yet more terror! As it turned out, it didn’t hurt at all. More like having a long tape worm pulled out of your penis.

Months of discomfort and embarrassment

The relief of removing the catheter only lasted about half a day. By the time I got home, I couldn’t take a single step in any direction without dripping all over the place. I’d seen a pelvic floor physiotherapist prior to my surgery, and I’d spent about 3 weeks doing the prescribed Kegel exercises before my op. But the trauma of surgery to all those nerves, the severing and rejoining of my urethra was way too much for my poor body to absorb.

And so it began. Months of discomfort and embarrassment. Even with my dearly beloved wife, my shame and awkwardness was acute, and my loneliness pervasive and expanding.

Leaking more than a litre of urine a day

Those first weeks were torture. I dutifully measured how much I was drinking and I weighed my pads to calculate how much I was leaking. I’d feel like a wee, but then only pass a tiny dribble. And yet trying to hold on to let your bladder fill a bit was a torture I just wasn’t very good at.

So like most of us PC sufferers, I was leaking over a litre of urine every day and hardly passing any in the traditional format. My urologist said it shouldn’t take long to be dry at night; and he was right. It was a tricky manoeuvre though.

My bedtime routine after surgery

Every night I would still suffer considerable dribbling whilst brushing teeth before bed. Just before bed I would change into fresh undies with a new pad. Then I’d roll up a great wad of toilet paper around my penis, and hop into bed. Lie down and read for a while. Then, at lights out, jump up, empty bladder, ditch the paper wad, and lie down again as quickly as possible.

I reckon I did that for a month or so until I realised I was waking up in the morning with a dry pad. It was then that I had a go at ditching the pad at night time.

Oh my god! The bliss of wearing just pyjamas. I was like a kid with a new toy. I kept the pre-bedtime toilet paper wad routine going briefly, but realised the quicker I lay down the better, and soon didn’t need the wad and then didn’t need to be so quick or worry so much.

The terror of wetting the bed was over! That milestone was a big boost for my mental health.

So how had I accomplished this? Well honestly, I can’t take as much credit as I’d like. Yes the Kegels are important. But as my urologist knew, antidiuretic hormone (ADH) is released during REM sleep. ADH’s most important role is to conserve the fluid volume of your body by reducing the amount of water that is passed out through the urine. So your biggest friend at night is simply a good night’s sleep.

See part two for my journey to dry(ish) daytimes.