Here’s what I got when I tracked my involuntary nocturnal tumescence for the year after my radical prostatectomy. In plain language, that’s “how hard was my morning wood.”

It was useful during my recovery because I didn’t have full natural erections and was losing heart. I was working at penile rehabilitation, but began to wonder if it was working. Progress was so – up and down – that I got confused whether or not I was improving. So I read up online about different ways of grading erection hardness, and started charting mine, until I could see the trend emerging.

Erectile function: one of the big 3 recoveries after prostate cancer

The background to this was my goal to Remove, Recover, Recover. That’s Remove cancer, Recover urine control, and Recover erectile function. Simple enough, or would it be? Certainly, I wanted the cancer completely gone and to keep my ability to hold urine and piss as I always had. And that last recovery—erections, that glorious phenomenon that I discovered as a child, and pretty much took for granted throughout my life—erections were something that I never wanted to lose. Nor do I ever want to give them up!

I found it was all a bit more complicated after my prostate surgery. Please read the full story. Meantime here is the way data tracking has helped me.

After my radical prostatectomy surgery, the doctors seemed especially keen to know about the return of “nocturnal tumescence” or those night-time erections during REM sleep, that give us “morning wood” as it’s often called. Though I was getting them regularly, they weren’t very strong, and I was shocked that my life-long instinct about emerging erections was totally unreliable.

Often, I felt as though there was an erect cock down there under the bed sheets, only to find a flaccid penis sleeping more soundly than I was. This “phantom erection” is a funny phenomenon that many of us who have had prostatectomies experience!

I’d been reading accounts by other men of long term ED after prostatectomy and I was afraid I might reach a plateau. My erectile function had been improving and then it kind of levelled off and I wondered if it would get any better. I was trying everything – daily Cialis, experimenting with different kinds of sexual stimulation, using a vacuum erectile device (VED) – but all this activity felt like it might be masking the true recovery of my body – or that the recovery was failing.

I decided that involuntary nocturnal tumescence would be a more realistic measure of recovery. After all, it isn’t affected by my feelings or actions – I am asleep at the time it happens. So I began tracking what level of “morning wood” was present when I woke as a measure that somehow felt more honest to me.

[Editor’s note: There is support for this approach from clinical researchers.]

Worried that my recovery might be taking too long and concerned that I wasn’t recovering my erections quickly enough, I began to plot these nighttime occurrences when I was aware of them, drawing my data from a diary that I keep on my recovery.

The data points went up and down every day, but it wasn’t long before an overall trend emerged. This was the remarkable outcome of graphing my own involuntary nocturnal tumescence – I immediately saw improvement. Here is the full set of data: 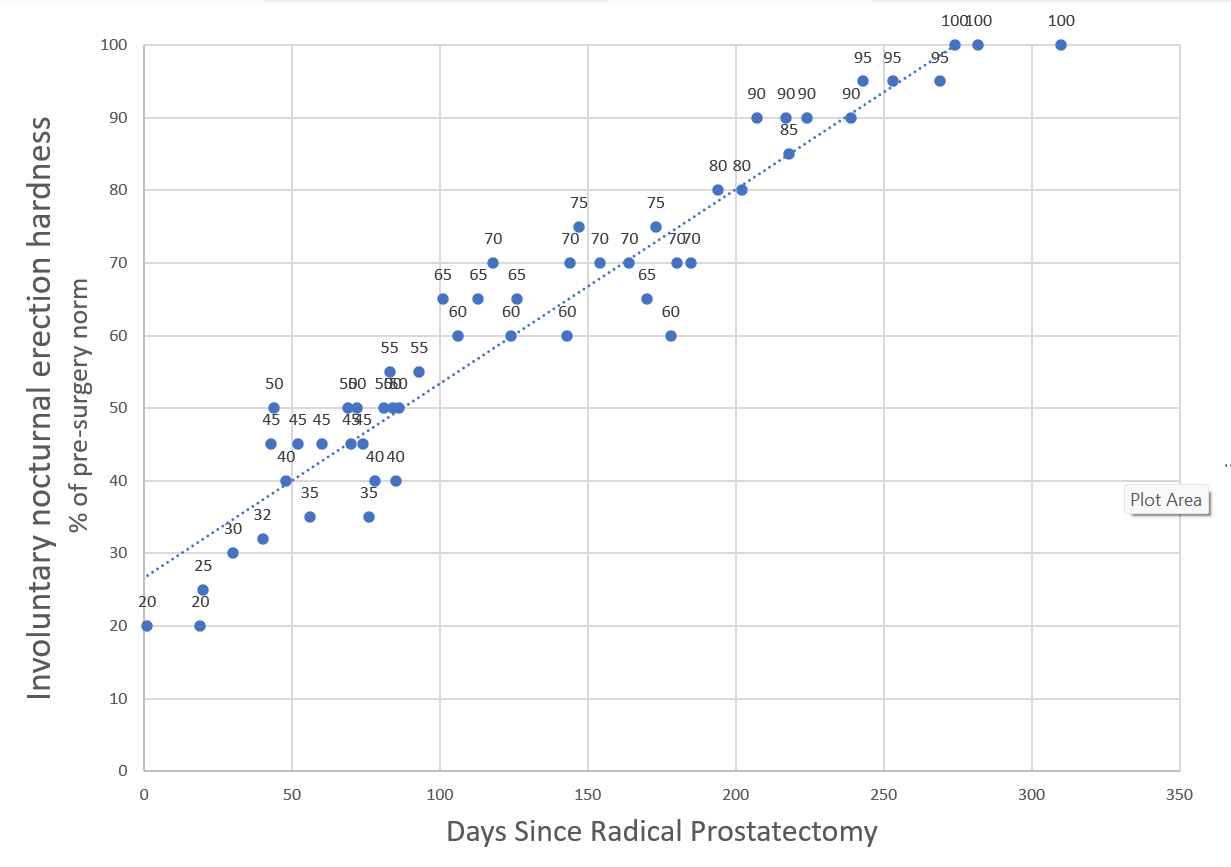 The graph that gave me hope

Of course the dotted line only emerged over time, but the upward trend definitely helped me keep on at all the penile rehab stuff, and to keep my hopes up. Eventually, on Day 274 post-prostatectomy, I recorded the first 100% erection – back up to full pre-surgery hardness!

I am one of the lucky ones

I’ve just celebrated the one-year anniversary of my prostatectomy surgery, and night-time erections have returned to normal. One of my doctors proclaimed that we hit the “trifecta” and eliminated the cancer, restored urinary function, and brought erectile functioning back to what it was before the surgery (albeit with the help of Tadalafil).

Read more from survivors and their partners