I like measuring things. Especially the reports on my health – cholesterol levels, blood sugar levels, blood pressure, weight. And graphing them, to get a sense of whether my general health is improving, or declining. My brother died at age 57, and my father at 94. Who knows my life expectancy? These graphs are an attempt to get some measure of control over an unpredictable life.

As I have recounted, I found myself gushing urine in the weeks after my prostate cancer surgery. Here’s how I held onto my sanity and found some sense of progress through measurement.

Urine control tracking spreadsheets: because I just needed to know

I was using up to five “man pads” a day to soak up that gushing urine. So I created a spreadsheet and weighed every pad after it had been used. I subtracted its weight before use, and ended up with a net weight of leakage per pad. You might think weighing and recording the weight of every pad seems like a great burden.

I just needed to know whether it was getting better or worse. In the early days it felt hopeless.

I only started recording weights two weeks after the operation, and there were days when I was leaking more than 300ml per day. the worst day ever, was 421 ml, which is a lot of fluid to be carrying around in your pants. Needless to say I went through four pads that day. I was graphing because I needed a sense of progress, and drawing graphs in Excel gave me that confidence.

This is how the numbers looked in the early days: 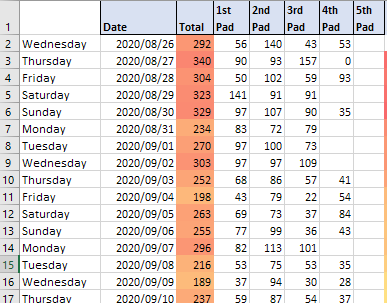 Urine leakage in ml per day

Admittedly, it was frustrating to hear that most folks have not had anywhere near this much leakage for this long, the lucky ones just had a bit of leakage for a couple of days and apparently those in their early 50’s generally only leaked for about six weeks at most.

This graph showed the daily usage – and it’s a depressing one: 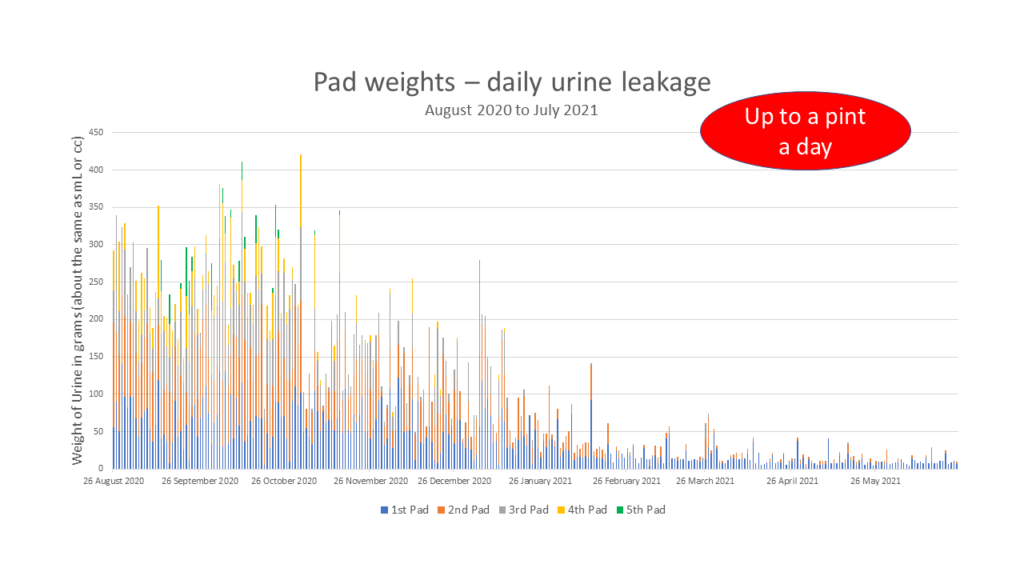 For a couple of months, now… it’s been at a low level. I feel that I have no right to complain compared to what it was like 10 months ago. There is a part of me however that despairs that it will ever stop, as the weekly average has been the same for nearly 3 months now.

Am I doing my Kegels right? Or is this a life sentence…

I set reminders on my phone for a couple of times per day, to do the Kegel exercises – as the physiotherapist said, I will be doing them for the rest of my life.

Maybe I’m not doing my Kegels often enough, or strongly enough, or something… but being able to get up in the morning and put on underwear, without having to also find a pad and wear that too, seems like a wistful hope now.

As the weekly average shows, and as the trendline cheerfully predicts, I should have stopped leaking at the beginning of May:

Tracking urine control: the outlook for years to come

However, 8 weeks later, the weekly average has not changed. Perhaps this is my life forever more… that I will constantly be dribbling into pads. I’ve been told by some folks that this goes on for a year. Others say that they put on a pad when going out, several years later.

The only thing that is certain is that nothing is certain.